ye is Kanye West’s eighth solo studio album. The album discusses topics in Kanye’s life, including mental health, family, and addiction. He also explicitly announces his diagnosis with bipolar disorder through the album’s artwork and a proclamation within the album. The seven-song project was premiered on June 1, 2018, at an exclusive listening party hosted in Jackson Hole, Wyoming, where the album was primarily created. This listening party was also live-streamed on WAV Media. At the listening party, comedian Chris Rock announced that the album was simply titled ye, although the title had initially been teased as LOVE EVERYONE. Unbeknownst to fans, Kim Kardashian, Kanye’s wife, had teased the title hours prior to the announcement. In an interview with Big Boy conducted during the Wyoming festivities, Kanye explained his decision to name the album ye: "I believe ‘ye’ is the most commonly used word in the Bible, and, in the Bible, it means ‘you,’ so it’s “I’m you, I’m us, it’s us.” It went from being Kanye, which means the only one, to just ye – just being a reflection of our good, our bad, our confused, everything, that I’m just more of a reflection of who we are, just as beings." Kanye also revealed in this interview that after his infamous TMZ interview (in which he stated that he believes slavery was a choice), he completely re-did his album with an entirely new theme. The fate of the original songs is currently unknown. ye is the second album in a five-album series of releases that are entirely produced by Kanye. It was preceded by Pusha-T’s DAYTONA, and succeeded by KIDS SEE GHOSTS (his collaborative album with Kid Cudi), Nas‘ NASIR, and Teyana Taylor’s K.T.S.E. The existence of the album was initially made public on April 19, 2018, when Kanye tweeted the expected release date. On May 15, 2018, Kanye tweeted a video displaying the working tracklists for his upcoming projects, his labeled “Ye.” At the time the video was shot, only two songs had been added to Ye’s album: “Wouldn’t Leave” and “Extacy” (which was later retitled “XTCY” and released on August 11, 2018). The video also displayed “Ghost Town” as a track on Ye and Kid Cudi’s collaborative album KIDS SEE GHOSTS, but it now appears as track 6 on ye. On June 10, 2018, ye became Kanye’s 8th consecutive No. 1 album on the Billboard 200.

f those battle-fields from which so many soldiers return to drink in all ladies’ plaudits? And if the idea of peril…

@AlexDwyerKS: DailyWire tries to own Ye by admitting they sell all their subscriber data to whoever will pay for it. Good to know your… 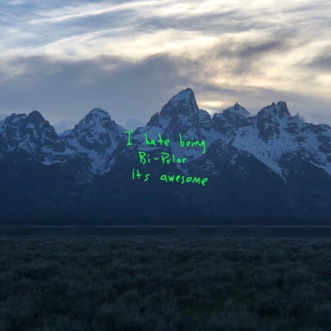