Destined 2 Win is Bronx, New York rapper Lil Tjay’s sophomore studio album, serving as the follow-up to his October 2019 debut, True 2 Myself. While Tjay often focuses on his struggles with love throughout the project, he also raps about his come-up and his awaiting successes, just as the title would suggest. The project hosts a multitude of collaborations, seeing Tjay link up with familiar collaborators of Polo G and Fivio Foreign, while collaborating with the likes of 6LACK, Saweetie, Tyga, Toosii, Offset, and Moneybagg Yo all for the first time. On March 24, Tjay confirmed the project’s release date of April 2 along with its cover art and tracklist. The project’s three final tracks serve as bonuses, tracks that were released as singles in late 2020, while its two collaborative singles — “Calling My Phone” and “Headshot ”— hold standard placement on the tracklist. Destined 2 Win debuted at number five on the US Billboard 200 chart with 62,000 album-equivalent units, including 3,000 pure album sales in its first week. This became Lil Tjay's second top ten charting album, matching True 2 Myself which also peaked at number five. In its second week, the album dropped to number eight on the chart, earning an additional 38,000 units. 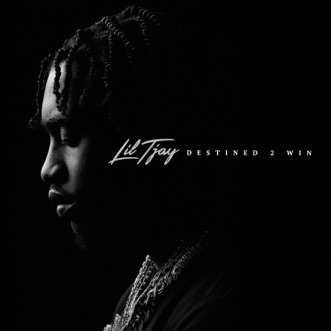