Happier Than Ever by Billie Eilish Album Info

Happier Than Ever is the second studio album by American singer Billie Eilish. It was released on July 30, 2021, by Darkroom and Interscope. Eilish wrote the album with her frequent collaborator, her brother FINNEAS, who produced the album himself. Eilish cited self-reflection during the COVID-19 pandemic as the biggest inspiration for the album. Primarily a downtempo pop record, Happier Than Ever is characterized by sparse, jazz-influenced, electropop arrangements set to meditative tempos, departing from the upbeat, trap-led sound of Eilish's debut album, WHEN WE ALL FALL ASLEEP, WHERE DO WE GO? (2019). Consisting of torch songs about the downsides of stardom, Happier Than Ever draws heavily from Eilish's rise to fame and the drawbacks that come with it. Upon release, the album received acclaim from music critics, who praised its stylistic, restrained production, and insightful lyrics. At the 64th Annual Grammy Awards, the album and its title track received a total of seven nominations, including Album of the Year, Best Pop Vocal Album, Song of the Year and Record of the Year. Seven singles were released in promotion of the album: "My Future", "Therefore I Am", "Your Power", "Lost Cause", "NDA", the title track, and "Male Fantasy"; the first three peaked within the top 10 of the US Billboard Hot 100. "Therefore I Am" was the highest-charting song from the album, peaking at number two, followed by "My Future" at number six, and "Your Power" at number 10. Happier Than Ever debuted atop the Billboard 200, becoming Eilish's second number-one album in the United States, and topping the album charts in 27 other countries. A Disney+ documentary concert film, Happier Than Ever: A Love Letter to Los Angeles, was released on September 3, 2021 and received a nomination for Best Music Film at the 2022 Grammys. To promote the album further, Eilish embarked on her fifth concert tour, titled Happier Than Ever, The World Tour, set to cover Europe, Oceania and North America in 2022. Upon release, Happier Than Ever received acclaim from music critics, who admired its resolute portrayal of teenage stardom contrasting its muted sound. At Metacritic, which assigns a normalized rating out of 100 to reviews from publications, the album has a weighted mean score of 86 based on 27 reviews, indicating "universal acclaim".

@BillieSociety: Happier than ever: The world tour is the 2nd biggest tour by a female artist in 2022 ! It grossed 106 million dollars m… 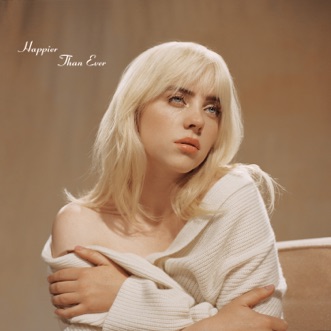 Happier Than Ever Album Credits

Happier Than Ever Similar MP3 Albums