they do have garret's and leigton's version of give into me....it is on another cd, i just bought it:)

You can find the orginal by Leigh and Garrett by typing in the name of the song and it brings their version up! So cool!

I fell in love with the songs from the movie, but when they were sung by the people IN the movie! What is this?? It's not a soundtrack. It's just the songs in the movie sung by different people. I don't like it!! I really wanted Garret Hedlund's version of all the songs he song, espically GIVE IN TO ME! That was THE best. Disappointed. Extremely.

Guys the song "Give Into Me" sung by Leighton and Garrett is on iTunes. Its on another album "Country Strong (More Music from the Motion Picture)"

For everyone who wanted the Leighton and Garrett version of Give in to me, then there is another soundtrack that has it, it's also a Country Strong album.

"Give into Me" should be sung by Garrett and Leighton...what a disappointment, sorry Faith! I would have bought it otherwise...

for those of you complaining about them loseing the garret/leight give in to me duet, THEY DIDNT!! there is a 2nd album called ccountry strong (more songs for the original motion picture) where you can find all the song in the movie sung by the actors!!!!---- go check it out

give into me is on the other soundtrack there is 2 and its on .99 cents

God-Driven-Designs.com - Give In To Me is on the 2nd CD

Did a quick search - Just look up the song name, or look up Country Strong (More Music) ;o)

Check out Country Strong: More Music from the Motion Picture for the duet of Give In To Me and for Gwyneth's "A Fighter"!

Everyone wanting the one from the movie with Leighton and Garrett singing do a search for Give into me and you will find it.

For the love. Faith Hill is SOOO over rated! Why in the world would they pick that version to be on the soundtrack over leighton and Garrett? I am so very dissapointed.

Looking for the Country Strong Music Video but i guess iTunes isn't going to offer it. Really disappointed

Like everyone else, I watched the movie and went straight to iTunes only to find an inferior faith hill version of give it to me.. Boo.

Coming home is the best song on this album

Now that I've seen the movie, I understand what the hype is about in terms of the duet not being included. What a bummer...this was such an amazing love song between the two characters and I really wonder why they did not include it. Dissapointed, but the album is still good. Also, wish there were more songs by Leighton and Garrett...they have great voices!!

SPCNSGR - GIVE IN TO ME

This is a great song, way better then Faith Hill sings it. It's amazing, when another play on a song, can change the way a person feels about those lyrics. I love the duet, if I were to get married now, I would use it for my wedding song. I can't wait until Garret comes out with an album, he has a sexy country voice. Leighton was really awesome as well, I would stick to country genre for her. She has a beautiful voice as well, just what country needs. Sing it Garrett and Leighton!!!!!

give in to me by leighton and garrett is on the soundtrack that says "more music from..."

sandman19837 - Other Country Strong Soundtrack has the good songs

All the popular big artists are on this album, but i thoroughly enjoy the other soundtrack much more. Has the songs as they were in the movie!!

Emily Bowman - The ones from the movie?!?!

Now, I don't dislike any of the songs, or maybe I should say versions of these wonderful songs on this album...but where are the versions from the movie? The ones I fell in love with? The ones that made this movie so great? I want Garrett and Leighton's "Give In To Me." I want Garrett's "Timing Is Everything." Where are the ones from the movie!?!?!

They have a different album with the movie version on it.

@ msoccerlvr - you can find Garrett Hedlund & Leighton Meester's version if you go to search just Leighton Meester, and look for the song, I just downloaded their version. :)

AbAlexander - for the awesome version...

Click on Garrett's name and they will take you to his versions of the song! So beautiful!

I loved this movie so much and I love every single song that was in it. Gwyneth Paltrow, Garrett Hedlund, and Leighton Meester all have such AMAZING voices that it made this movie even better. I love every single song on this CD but yes, I was disappointed that the duet between Garrett Hedlund and Leighton Meester wasn't on here. After watching the movie I played that song all through the night. All in all, amazing movie and amazing soundtrack. Just wish the duet of 'Give Into Me' was on here as well.

I wish I saved a few bucks and just bought Country Strong (More Music from the Motion Picture) which has the duet between Garret and Leighton plus Silver Wings and a bunch of songs that I thought was much better than the first edition.

all of you spazzing about the garrett/leighton version of give in to me not being on the album....you can get the single version for 99 cents on itunes also. hello?!?!? search button, duh!

Search that ... or just put in Garrett hedlund... All the performances by him are on that cd. His version of " Timing is Everything" is one of the best Country Songs of ALL TIME. Who would have thought the guy from Tron could Sing and Sing very well. My Five Stars is for the album titled "More music From Country Strong".

If you get anything off this soundtrack... get Leighton Meester's 'Words I Couldn't Say' - such a better version than the Rascal's in my opinion... and I love the Flatts. Watch the movie and you'll fall in love with this album.

SOOOO SAD THAT THEY ONLY HAVE FAITH'S VERSION OF "GIVE IN TO ME" THE DUET IN THE MOVIE WAS SOOOOO MUCH BETTER!!!!! BOOOOO!!!

Hkolton - I'm bummed out too (answers)

I'm bummed out go to the other album with country strong. That's where most of their songs are, including "Give In To Me" from the movie. Hope it helps

I watched the movie on ppv at night and before heading to bed I decided to download the sountrack so I'd have it to listen to on a road trip the next day. I was SAD SAD SAD to see they had Faith Hill singing it instead! Faith did a wonderful job, and if I had heard her sing it first I'd have been satisfied, however I was lookiing for the singers from the movie.

they do have the song. it's on the album "Country Strong (More Music from the Motion Picture)." there are also more songs by garrett and leighton.

I agree with the many who say they need Leighton and Garrett's version of "Give In To Me." Such a gorgeous song that isn't being given the chance it should! I also wouldn't complain if there were more songs by Garrett either! Great voice, and I was a bit sad to see that they commercialized some of the original film songs. Me and Tennessee is also an amazing duet. Wonderful otherwise!

Ok, I know that they tell Chiles that she needs to stop singing that Country Pop, but Summergirl was a really good song. I wanted to listen to it... and the only good song on here is "Words I Couldn't Say". What happened?

mojicaalltheway - NO I need that duet!

The only reason I looked up this album is because of the Give Into Me duet and they don't even have the movie version :( That is very sad.

Synne Jensseter - Would be five stars

if they kept Leighton and Garret's duet and him and Gwyneth doing a duet of Timing Is Everything!

i want Me an Tennessee but i have to buy whole album!?!?!?!?! i mean i love the album but not enought to get all the songs because i only like half the songs :( but other then that I LOVED THE MOVIE!! AND PLEASE READ!!!! they put the garret hedlund and leighton meester version of give into me in the other country strong album

love the songs, but I was looking forward to seeing Randy Rogers Band, Still You Away on here,

So happy that they released a more music album for this sound track. Garret Hedlund is SPECTACULAR!!!!! I so hope to hear more music from him in the future. he definetly has a job in music.

I was so excited. I thought I was going to be able to get Garret & Leightons "Give In To Me". Faith Hill...really? Let down.

There is another Country Strong Soundtrack with all the great songs from the movie by Garrett Hedlund and Leighton Meester! Its okay people, relax.

Disappointment! Where are the songs by Leighton and Garrett? This was supposed to be the sound track from the movie, but their songs are missing. Garrett sounds like a young Kris Kristopherson. Beautiful harmony between the two of them. There needs to be a release of their songs.

Give into Me and Timing is Everything recordedby Garret Hedlund. Just search his name

I cannot believe that that Hedlund's version of "Timing is Everything" is not on here as well as "Give Into Me!" Those were the two best songs on the movie and the versions on this soundtrack don't do them justice. 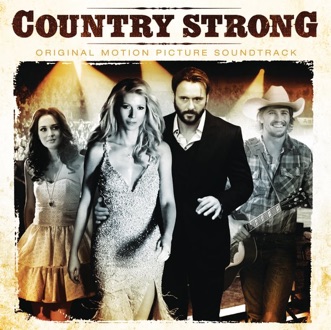