I recently reviewed 2Cellos’ 2018 release, "Let There Be Cello," and absolutely flipped. I hungrily went looking for more of this amazing duo’s music and grabbed their previous release, "Score." This 2017 collection of favorite movie music is performed by the marvelous cellists from Croatia and backed by the London Symphony (Robin Smith conducting). "Score" is gorgeous and the arrangements are stellar, but after the unbridled excitement of "Let There Be Cello," this one is a bit subdued. (For people who prefer 2Cellos’ more classical side, I’m sure that’s good news!) The music comes from fourteen movies released as far back as 1961 (“Breakfast at Tiffany’s”) up through a medley from "Game of Thrones." Most are classics, but I wasn’t familiar with a few of the tracks. 2Cellos is Luka Sulic and Stjepan Hauser. Both artists have played the cello since childhood. Sulic graduated from the acclaimed Royal Academy of Music in London, and Hauser from the Royal Northern College of Music in Manchester, both in 2011. Both have won many top prizes in international music competitions. 2Cellos rose to fame in 2011 when their version of Michael Jackson’s “Smooth Criminal” took the world by storm. The YouTube video became a massive viral hit leading to a record deal with Portrait/Sony Music Masterworks and an invitation to join Sir Elton John on his worldwide tour. They have appeared on a number of television shows and are currently touring the US in support of "Let There Be Cello," their fifth album with Sony Music Masterworks. "Score" begins with the Medley from "Game of Thrones," the most intense and exhilarating piece on the album. “May It Be” from "The Lord of the Rings: The Fellowship of the Ring" overflows with poignant emotion and delicate beauty - a favorite! “For the Love of a Princess” from "Braveheart" was a new piece to these ears, and it’s also a beauty with passion and tenderness flowing from every note. While some of the themes are classic (“Love Story,” “Love theme from 'The Godfather'," and especially “My Heart Will Go On” from "Titanic"), my longtime piano teacher’s ears have lost their enchantment with them no matter how well they’re played or arranged. I still love Henry Mancini’s “Moon River” and Vangelis’ theme from "Chariots of Fire," though, and the arrangements on this album are wonderful! I also really like the "Rain Man" theme, “Cavatina” from "The Deer Hunter," and the main theme from "Schindler’s List." If you have a passion for beautiful movie music played with classical elegance, "Score" is a great choice!

My problem is not with their playing. They both play beautifully, but whomever did the arangements shold be shot. Why would you change the harmonies to many of these pieces. Schindler's list is massacred harmonically as are many others, and the orchestra is so tuned down half the time it sounds like a mistake. Very Odd!

I am a young cellist in my high school orchestra and I’ve been in love with their music almost forever. This album just makes them even greater, which I already thought was impossible. Can’t wait for what comes next.

The raw emotion, virtuosity, versatility, and technical perfection with which these guys play cellos is magnificent! They are second to none on the cello, a beautiful instrument that transcends genres and stereotypes thanks to the work of Luka and Stjepan. 🎻🎻👏🏼👏🏼👏🏼👏🏼👏🏼

Heard this album live at the Greek Theater in LA. It was fantastic! The friend I brought with me was screaming with joy! We had a fantastic time. They are so skilled, sexy, and who knew they are also funny?!

I enjoy this album a lot. Beautiful arrangement! Thanks guys.

2Cellos never disappoints! Their music takes you to new heights with every listen. The last 2:25 of 'Now We Are Free' will stir your deepest emotions, great album!

It's really bad like you shouldn't buy it "being sarcastic" 🤦🏽‍♀️

As a cellist myself, I appreciate the beauty in this album. Not their average rock, but amazingly passionate.

One of my favorites!!! Highly recommend! Peaceful and inspiring

Ok now y'all be gettin it wit y'all cellos.

Sound and harmonies produced by these extraordinary musicians is beautiful and inspiring. Already awaiting a second similar album!

This is pretty darn cool.

Beginner cellist here and listening to your work fills me with the deepest awe and biggest inspiration! ❤

Picklenichols - Not what I expected

It's a great album. Slow but still great.

This one amazing album. A collection that melts in your mind, and leaves you relaxed and peaceful. This is one beautiful album fom two talented young guys who make their cellos talk with voices of Angles. Awesome beyound words

I dare say that these two fine chaps are the most admiral musicians I ever seen! There music is beyond the world wonderful

2Cellos are truly virtuosos. I'm so excited for this album! I can tell it's going to be great. The Game Of Thrones medley is AMAZING. I'm excited for what's to come and this tour !!!

Love these two and their creative sound!

Léa Lopez - They are THE bomb

I agree with Joeapple....And Heidi Klum say on AGT "this is somethings new,somethings i never hear before.".....Yeah right...Stick to modelling.

This is a rip off of apocalyptica

This is by far the best album from 2CELLOS that I had ever bought and there music just touches the soul with there duo cello playing. This album is a must to get and worth every dollar, I myself am a cellist and hearing this gives me more inpiration to make my cello playing a lot better. Congradulations 2CELLOS.

They do a lot of good music

This album is perfect for all cello enthusiasts and film score enthusiasts alike! The arrangements are intricate and clever, making such cliched tunes as 'My Heart Will Go On' from Titanic and 'Moon River' from Breakfast at Tiffany's feel new and fresh. The LSO accompany the 2 solists with the poise, precision, and passionate performance one would expect. A whole host of varied composers are featured, from the octogenarians Ennio Morricone and John Williams to the biggest and freshest names today, such as Hans Zimmer and Ramin Djawadi. In particular I have to mention 'Love Story' and 'Cinema Paradiso' for their delicate and beautiful arrangements, 'Rain Man' for bringing out an orientalist feel to the music that nevertheless feels appropriate, 'Titles' from Chariots of Fire for avoiding electronics, and 'Malena' for a simple yet heartfelt performance. I really can't find much to fault here - every piece has its own strengths, especially since each melody is from the creme de la creme of film score history, and Luka and Stjepan perform beautifully. 5 stars from me!

@evrthsangel: moon river by frank ocean + the sound of rain

moon river by frank ocean + the sound of rain 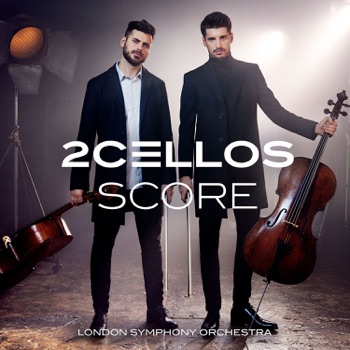