This Album is soo GREAT. Triumph MUSIC! Every emotion with that cool NorthWest touch

TheJeebus - The first album to remind me that there is hope

As each track progress you feel like each one follows you down a chilling way as each track reminds me of something that shall always be remembered but at the same moved on to.

rcs831 - A Moment apart is sublime

Came across this from a video I saw and it’s been stuck in my head ever since.

socaway - THIS SONG IS AWESOME

I love this song I have to at least listen to it for a part of each day this song is also on the start screen on FORZA Horizon 4 witch is an awesome game.

This album has changed my life without question. Just give it a listen. I guarantee it’ll be worth your time. Congrats, Odesza. You really have outdone yourself this time.

Bands these days are just going through the motions. So much style without substance. Where are the stories?

whineedsanickname - This generation's Play from Moby

One word is all that is needed to describe this album......”AMAZING.” I never get tired of listening to this album. Amazon music turned me onto this group.

I’ve been a huge Odesza fan for several years but saw this live yesterday for the first time and it honestly felt like a religious experience! It was INCREDIBLE! I can’t even describe how amazing they were and how badly I want to go see them again. I love this entire album and the tour for this was hands down the greatest thing ever!

Love these artists... unbelievable. I am constantly listening on Alexa but finally just bought the album. Very pure, mind opening music... I don’t even have the words to compliment them properly 🖤

Peaceability - Get to a concert.. It will blow you mind, heart, and soul...

I've never replayed an album over, and over, and over....as much as I have this one. So many cords, feelings, emotions... Masterfully done...

This album is just awesome. Every song & that’s rare.

Ok, impossible to describe how I feel about this album, but I'll try. It's pretty weird and took me by surprise... When I listen to this album, I feel like I know a secret that only Odesza and I are in on. It lights up my mind and takes me somewhere. I feel like I'm absorbed into the songs and just when I think I've dissolved to nothing, I find my self there. This is what love feels like. Thanks guys! <3 By the way... part of me... I can't even describe is completely owned by Line of Sight specifically. My god does it get to me. To say I love it or like it would be a silly understatement. This song picks me up and makes love to every cell in my body. There, that's more accurate. lol While I am definitely a music lover, the music doesn't tend to grab me and love me back so powerfully. Hence why I'm shamelessly smitten. :)

This is such an amazing album. I listen to it on repeat on my long runs during my ultramarathon training and it really helps me zone out and grind out the miles!

I listen to this album all the time

I love running to every one of the songs of the album! Amazing work!

Meridian is the absolute best song ever made!!!

Well, I've been waiting for the full release and so it goes, this is great. There's great music coupled with what seems to be some kind of journey in sound, space, places on earth. It's a sampling of worldly environments if that makes sense. Best tracks not trending are 9 and 13

This album is a beautiful work of art. I'm so impressed with how much it makes me feel. Thank you!

To say this wasn’t anticipated wouldn’t be true - BUT - they’ve blown it out of the water with this epic record. Just OUTSTANDING. Get the 10 scheckels together and grab it!!!!!!!!!!

My favorite Odesza album to date. And that's saying something. There isn't even a medicore song on this album. They are all amazing and on constant repeat.

This is the best electronic music to date. Very uplifting and spiritual. Odesza has done a very great job making this album

Your music just does something to my soul!!!!

Sitara93 - This album is EVERYTHING

Beautifully mastered. I was waiting for a new cd to drop. Did not disappoint.

Even though album contains pop music, the whole entire album is cohesive. Line of Sight is the best song of 2017 because it’s so reflective of what is happening today.

I think I must have listened to this album every day since I have bought it the week it came out. It is wrapped together so well that it just feels you with feeling, I can't describe it but it's everything. So mad I can't be at my local show.

Best album yet from odesza! It's hard not to dance while I'm in my cubicle at work... 😳

I’m freaking in love with this music!!!

"In Return" was a perfect album to me, perfect in that every song was great. "A Moment Apart" doesn't quite live up to the same, as a few of the tracks are boring/uninteresting. But the rest of the tracks are really great. Definitely recommended for any ODESZA fan

my ears my spirit ODESZA you guys never stop macking music I love all the new stuff you have added if I could give a 10 star I would another album added to my ODESZA collection awesome work!!!!!!

This is the best album ever! I love odesza!

This is an amazing album :)

Different than past albums, but it has its own character. It seems to have more of a pop influence to it. I love boy, a moment apart, divide, and falls. Listened to the album on SoundCloud first, but had to buy it to support them. Great job guys 💕

After hours of hand-banging drops and jam bands at your local edm festival. It is always such a great break to chillax to Odesza!

There are very artists where I have liked every song in an album to actualy buy the whole album. Every song in a moment apart is absolutely amazing! Wow Odesza! This is a masterpiece album.

Odesza just keeps getting better and better! They also sound very similar to another one of my favorite bands..M83. Check this album out! You won't be disappointed if you're a true fan of Odesza.

Odesza, you guys are great I love the music you've made! Up to this point I loved every song I've heard. I could listen to any of your albums all the way through and love every second! A Moment Apart sadly is a bit of a different story. The album still has greatness in it but also songs like "Falls" that scream skip me. In my first listen tracks 1-6 gave me chills especially the "Intro" leading to "A Moment Apart" and then again at "Line of Sight" all of which I absolutely loved. Then the seemingly desperate attempt to be played on the radio part of the album. Songs like "Across the Room," "Everything at Your Feet," "Just a Memory," "Divide," and "Falls" are the ones that push me off of loving this album. Of course this is all my opinion. Odesza please please please back off of the pop radio type sound and put your sound first over the vocals.

eva.blu - LOVE IT SO MUCH THIS IS EPIC

I want to work for ODESZA

I can listen to this album over and over. Each song is amazing. ❤

Odesza's new album impressed me. They defined the genre of chillwave through lush soundscapes and gigantic, half-time feels. I expect even greater things in the future. Odesza's a group that you should keep your eye on.

Absolutely loved Summer’s Gone from start to finish. That album is what made me a fan of Odesza. When they released In Return, it was pretty solid but hardly a worthy successor to Summer’s Gone. A Moment Apart came out and instantly loved almost every track. Definitely one of the best albums released this year and probably my favourite album from Odesza. Highlights include listening “Intro” and then followed by “A Moment Apart” (pure ear candy), Higher Ground, Boy, Late Night, Meridian, and Everything at your Feet. Some tracks will take sometime to get use to like “Show Me” and then there’s a couple of tracks that I just didn’t care for. Liked Summer’s Gone? Then you’ll love this album A Moment Apart.

Doesn’t get much better than this

This is the definition of good music.

PAM300295 - Fantastic album true to their style and even better

We really loved In Return and were happy to see a new album out. It is fantastic. The sounds are classic Odesza, with new unique sounds and mixes. It is a delight to the ears. Relaxing but engaging. I highly recommend buying this album. Our two favorites are Late Night and La Ciudad if you are looking to discover highlights.

My favourite Odesza album yet.

Can't wait till the full album gets released! Listening to the early releases on repeat until then!

My personnal new favorite duo 🙌 theses songs are all so freaking good!!!! Can't wait for the full album!!

It's Odesza. Nothing else to be said💯💯👌🏻

This album has got me hooked, being in the music industry and appreciate the the vocal and beats, every track on this album has me hooked. I've been following the music by Odesza and find it inspirational, having suffered from mental illness for the past year, its motivational to me and I hope others will be inspired like I am. Keep up the good work. Love and respect xx

This is superb ! Your getting better by the Album ! !!! This is a mature advancement of an already accomplished producer and composer ! Great Album ! Well done ! I will be giving it max air play ! Thanx

Beautiful album, its just so good! Love an album I can just let play with no need to skip a single song, this is certainly one of those albums. Keep making music ODESZA!

Having listened to 'In Return' a fair bit, I could hear their style & genre - it's still heard in 'A Moment Apart' but the boys have layered in so many other genres still with clear-cut rhythm and melodies that I feel build on 'In Bloom'. Every single track is unique and beautiful to listen to, especially with the featured vocals on many of the tracks. The eponymous track 'A Moment Apart' gives me those good-vibes tingles, especially with the preceding 'Intro'. 'Thin Floors and Tall Ceilings' is a gorgeous instrumental and 'Everything at Your Feet ft The Chamanas' is lyrically poetic song of lost love. I am so excited to see these guys for the first time at the O2 Forum Kentish Town!! Tl;dr: unique tracks, stays true to original Odesza sound, beautiful vocals & collaborations.

By far the best album of 2017, the Odesza boys are just cruising through amazing tunes and sounds. A feast for the ears and a wonderful journey into the world of music. Just beautiful.

This is the first album i've bought in over a decade. Every song is absolutely beautifully crafted and immense consideration, feeling and effort has been put into each and every single track. Thank you guys. Your music has made the world feel a whole lot brighter.

Odesza do it again. A more mature sound from them I think this time around. 'In return' has still got to be my favourite album so far by the duo.

I have never been more excited than this.. in return was incredible but this may top it 😍 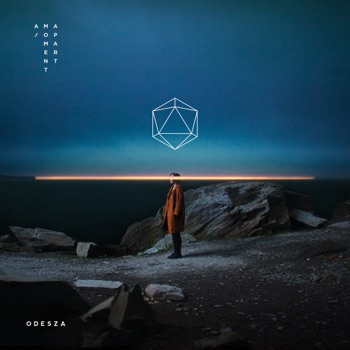