Such a good album. I dont know why this one isnt getting as good of reveiws as the other ones but i think this album is awesome. I like every song on here. I grew up near oxnard so this is just awesome to listen to. It captures a sound that is exactly like that area of california in my opinion. Just a goood album with solid features. Saviers road is my favorite song. Simple but good. All the songs on here are 5 stars though.

Not worth the wait

One of the best new artists. This guy is very talented and he puts out quality tracks.

Loved the previous albums this one is just okay.

After seeing Anderson .Paak perform on SNL and then enjoying his music reviews on Vice News on HBO got me to purchase this album. Listened to it at the gym and it was really good!

You got more in you this won’t it playa

This album is the bomb. Anderson brings it once more with an ensemble cast of brilliance. Sure, there’s a small smattering of wankers who have taken delight in demonstrating their critical genius for us here, but, you’ll always have those who can’t get over themselves. This album shows us once more why Anderson Paak will be around for a long time.

I waited a while for this to come out. Anderson Paak is one of the most creative rappers in the industry right now but this album wasn’t as great as I hoped it would be. It’s still good though. It was nice to see dr. Dre heavily involved in this project, even featured on it along with snoop dogg, j. Cole, Kendrick Lamar and many others. “Who r u” was probably my favorite track on here. The classic old school g funk sound makes Dre’s involvement noticeable. This was an enjoyable album and I would recommend it.

The smart ones will keep very close to Paaks music from here on out. This one was amazing, but the future is lit.

I really like the album. The production, song writing and music is what’s needed with the mess being played on radio today!!!

ok, saw them on snl tonight and what a surprise! fresh! bring it and thanx for a change.

I expected something much more and very different since Dr.Dre was involved.

I do a lot of driving in the morning and I only listen to music when I’m on the road. This album manages to wake me up in the morning and keep me at ease. Aside from the four hits, My favorites so far have been “brother’s keeper”, “anywhere”, “cheers” and “left to right”. “Anywhere” is a good song to play on a rainy day

itsjbreeze - I Didn’t Like it at First... but Oxnard Grew on Me!

Been a .Paak fan since I first heard Malibu in 2016... Malibu had this distinct sound that was easy on the ears. He made you wanna sing, rap, and dance all at once! Oxnard is definitely an evolution of .Paak’s sound. His voice and energy are as bright, powerful, and charismatic as ever. It’s got a bigger sound on the boards (thanks to the Dr.), huge features who all bring their A game (Pusha and Cole are my favs), and amazing replay value. Keep killin’ em Anderson! YES LAWD!

His sound is amazing to me!

Was hopeful about this brother because of his musicianship, but there seems to be something missing. Feels like it’s not rooted or grounded. Soft. False.

Paak came back strong, just as good or maybe better than Malibu. The one song that stands out is 6 Summers especially in regards to the lyrics and the message.

I had a case of the rabies, then I got the diabetes, then I got a spell casted on me. Oxnard not only saved my life, if cured my soul. Listen to this this new new if you believe ever felt doo doo

Bangin start to finish. Can’t wait for what he does next!!

Matt_jones1515 - Not great but not terrible

Who the fook is this guy? Addictive grooves, lacks depth

Great album. Now I need the clean version so I can listen to it with my kids in the car.

I can’t believe that you have to pay for songs why not some free songs?

iiiîuuujuu - She Was was A fun I

Great album, great features, very smooth, perfect mixing & engineerings on every song but still felt like something was missing for me. I hope it’ll be 5/5 next time :)

Classic sophmore offering, confused, too many hands in the pot. Not as soulful, not as cohesive.

This is by far his best work! Got with tha Doc to make it Official! This album makes malibu look like a rough draft

He keeps getting better - one to watch...

Anderson Paak does it again!

BigBodySlabFunkInYourEarhole - Album of he Year

One of the top two r&b artists of our generation.

I thought this album was solid. Paak is dope 🔥

After hearing this album just checking it out, I am glad that I did. Every track has a little unexpected surprise in it. I can tell a good album when I can’t get enough of it. No drum machines, no auto tune, no zombie rap and NO DRAKE (YES LAWD to that). Live instrumentation and pure originality. Got that K. Dot TPAB appeal which is always good to my ears. I didn’t have to skip not 1 track. That’s how amazing this album is. The brother is very multitalented and knows it. I’m sooooo glad I checked out this album when it dropped. I have to put this up in my favorites with the rest of my favorites. Anderson. Paak, H.E.R. and Ella Mai are runnin the music scene. YES LAWD 🙌🙌🙌

cOSMIC.jAY - I hate this guy, stupid annoying kendrick wanna be.

This is crap who listens to this crap? No one

Idk how the hell companies like Pitchfork aren’t raving about this album; it is easily one of the most well-produced albums of 2018 for one. The jazzy production and sometimes banger-esque beats work perfectly with .Paak, who also delivers great performance on this thing. Something else that surprised me is how consistent this album was. If I was trying hard to find the flaws on Oxnard, maybe the last few tracks didn’t live up to the standard the rest of it set for itself, but they were still great, and the last 2 were bonus tracks anyway. This thing was an experience, one of if not the best musical experiences I had this year!

This albums production and vocals are perfect. This is Anderson .Paak at his best. The features are perfectly blended into the songs. Tints is a perfect example of that. I don’t understand why people have a problem with the production this is some of Dr. Dre’s best production.

This album is great for chillin with your girl, hittin the blunt and rubbin on them boobies.

What is the motive in this I get it it’s classy type but to what end?? Are you leaning to the modern hip pop or more to the earlier age??

I’ve listened to most of it, it’s certainly outstanding. I really can’t imagine a record better than Yes Lawd! though. That’s my opinion. Oxnard takes risks, and a lot of it feels like Dre had too heavy of a hand in paaks vocals, instruction-wise. Yes lawd was just a presentation of beats by knxwledge and paak just went off, where Oxnard feels more like this big project that keeps aiming for perfection. Felt overly rehearsed IMO, however I’ve never not enjoyed a production Paak puts out. This record is impactful. 4 stars.

That’s all I gotta say.

Disclaimer: I’m a HUGE Anderson .Paak fan. This album, from one of my favorite artists of recent years, was nothing shy of a massive letdown. Venice was incredible, despite being a little all over the place as far as tempo was concerned, and Malibu was nothing short of a masterpiece. .Paak does not sound nearly as good over this confused, struggling-to-stay-relevant Dr. Dre production. He’s much better over Knxledge beats under their duo name “NxWorries”. The single “Tints” harkens back to the “Venice” days, although comes off as flat and a bit forced with an underwhelming Kendrick Lamar feature. I’m not sure why “Who R U?” was chosen as a single as it’s simply awful. The intro song “The Chase” is one of the only highlights, and despite an all star cast of (frankly too many) featured artists, it’s all downhill from there.

There is something about Anderson...✌️

Where’s the bars? A mis mash of anything and everything in here, except solid rhymes.

I wish apple would not allow people to give reviews before release, not a great album in my opinion. Nothing special here.

PAAK AND DOC CREATING A MASTERPIECE

Fantastic range of good vibes, lyricism and funk/rap/soul. A lot more funk orientated than Malibu. Only critisism: Would have liked one or two more uptempo things (re: "Am I Wrong"), and the Patois on "Left To Right".. but overall happy with the wait. Paak is back.

Album gonna be tight af! Can’t wait to hear this, Malibu one of my fave albums of 2016

BenicioMurray - In PAAK we trust

A tight and polished album.

Best album I have heard in a long time. Refreshing and vibrant.

Anderson .Paak gets better and better with every album!!!

Anderson .Paak gets better and better with every album!!! 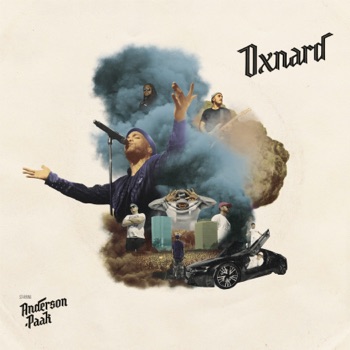