The song Rule the World is the bomb.com!! Her vocals are amazing!! Yesssss!!!

2 chains is definitely in a league all on his own. Forever a fan

Trevin <3 - RULE THE WOrld IS A QUEEEEN

RULE THE WORLD IS A HIT YESSSSS 🖤

This is one of the best albums I have heard, it has so much variety.

Betteroffari - THE STAR FOR ARI ONLY

I have a bunch of his songs but I have never got an entire album of his. Simply because he only has 2-3 good song out the whole project.

We the young and dangerous 🗣 Arianna over the amerie beat. Shut up 😍😍 There’s more but... Y’all sleep

It’s not as good as the past albums

ten out if ten - Amazing

Not happy with this album 👎🏾

The era this clown came in on & pretty much everything after has just been garbage!!

2Chainz 🔥🔥🔥 he is the perfect of hard work pays off and he will continue to shine and do his thing. Thank You Sir

Hooked on asphalt 6 - Album is the Truth!!

The beats are on point for every record....

This is definitely what the world needed. So much substance, so much authenticity, so much 🔥🔥🔥🔥🔥🔥🔥🔥🔥🔥

Rap or Go to the League by 2 chainz is another solid performance from a artist. He keeps true to his style on songs like NCAA, and statue of limitations which are my favorite. Another great song momma is I hit a lick which is defiantly a different sound for him and a fun song. It defiantly has its ups and it’s downs but over all I would say Rap or Go to the League is a good album and I would defiantly recommend it to any fan of 2 chainz, trap music or just real hip hop.

I expected something better than this trash. I will still and always listen to his music 🎶 but this only has a few good songs.

I was hoping that at minimum the joint with Kendrick would be good. But nothing on this album was really that good. It didn’t sound like anything any of the artist have put out before. Sorry but it was weak 🤷🏾‍♂️👎🏾

You can hear the growth in his delivery and overall quality. “Rule The World”...🔥🔥🔥

Porsha39 - I support every cd

Man from College Park to the big league. I love it not only that he is paving his own way. Not many can stay on top after a few cd’s. I bet my money on 2 chainz every time. Didn’t y’all get the song he made “I’m different” nuff said. Reppin my city and hometown (I’m proud of him)!!! The sky is beyond the limit now!

2 Chainz is a good rapper and this album has a great swagger if you want to say that! And the song with Ariana Grande was the best one!

Yea this one was weak compared to his last too LeBron doesn’t need to help 2 chain now more... album sounds like the Laker season trash, sorry chainz just keeping it real💯

more cr@p from the clone machine

Just a bunch of mumbo jumbo nonsense. Props for no auto tune that I could see. Usually listen to this stuff to see how bad it is and I’m not usually let down. Wasn’t here lol

Idk I love this song but it gives me Japan vibes. Am I the only one? Still loveeeee this song!

This could have been good but it's by 2lames. So I wasn't expecting lyrics. He just still doing the same things. Repeating things in a simple form trying to sound like he's saying something. Don't bother with this trash.

I like chainz but this not him, don’t got that Atlanta feel at all.

2 Chainz is a mediocre rapper who made a really good album. Not one skip on this record.

WillMyKnicksEverWin? - Ok, but not my favorite

I thought the album was just ok. For example, I like almost all of Kendrick’s music, but when he was featured on a song in the album I just wasn’t feeling it. Decent album, but not for me.

All of these new day rappers have the same monotonous material they use in all their albums. It's a pathetic attempt for it to be called hip-hop and honestly just a real bore to listen to. Whoever reads this and is a true hip-hop head, check out an underground group called Epidemic. They're on a level that none of these 'rappers'/'mumble rappers' can even fathom.

Lebron did what to help this garbage album.

I ain’t got much to say ain’t bad, ain’t great

solid project with some great features 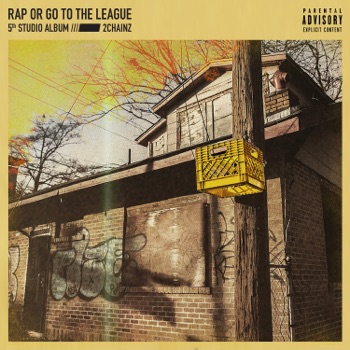