Press by Cardi B MP3 Info

expected more.. the lyrics, the flow, what is this?

Doja Cat was mocking your best song ever, PERIOD.

This is proof that Cardi has no class. Again this song is garbage he so I’m not surprised.

Sorry but Cardi B is TRASH

The song is fire and y’all some haters, PERIODT!

barrellrider579 - Well I guess she finally wrote a rap🤢

And it is trash. Y’all can’t say nothing bout Nicki after this .

You’re trash. Nicki is the queen. Are you even trying?

Garbage “music” from a garbage person.

skia b - For hating mfkers🖕

just bought it!! I love her music 🎼

How do you recite a song about people being “pressed” when you’re always on live every week whining and complaining about nonsense you’ve created for yourself? 😩 You and your fan base are more narcissistic than Donald Trump and his supporters!

CARDI B IS A HARD WORKING WOMAN AND EVEN THOUGH SHE MITA DID SOME BAD THINGS DOESN’T MEAN HER MUSIC IS’NT GOOD BECAUSE I LOVE HER MUSIC AND YOU HATERS(RASCISTS) NEED TO STOP YOU DID IT TO BLANCO BROWN CARDI B, LIL NAS X AND MANY MORE! STOP HATING ON BLACK PEOPLE!!!!!! GESH!!!!!!😡😡😡😡😡😡😡

For someone who don’t write, you would think she could get a bit creative at least with the flow. She’s wack. Nicki is the Versatile QUEEN

Press? Yeah press pause on that rap career and save us our eardrums

What’s up with all this hate

It’s obviously not revolutionary, but lyrically quite unique and original. Phonetically in a class of her own. It’s actually a sign of her influence and staying power that people are so pressed they need to vent by giving it 1 star. Cardi ain’t. Ding-dong!

AntonGrancharov - One of her best

The video and songs are so catchy and so my cup of tea. 5/5

This single was garbage and Cardi is a horrible rapper. Nicki is better

urmomsjsjsjsjs - YOUR TIME IS UP

Absolutely disgusting and disrespectful to any rapper with talent. Also she has a kid, let that sink in. Glad to see one more “rapper” leave and make room for someone talented and not this awful music. It’s retarted she’s just the perfect picture of a nightmare of rap taking a wrong turn. And look where we are, a rapper without talent gets a Grammy. Only gets credit bc she’s a female but yet she can’t just shut up about her body and her money. It would be one thing if she was a random rapper but no she got a Grammy. It’s honestly disgusting what hip hop has become. Anyone to love this song is literally new to music itself and in a year their regret listening to this awful artist let alone support her. X should of gotten the Grammy but instead they wouldn’t let him Bc his “bad choices” but yet he died trying to change himself for the better. And look where we are, reality can often be disappointing. So many reasons why I hate this artist but I feel worse the more time I dedicate towards reviewing this. Her time is up, rejoice.

It’s just her yelling in another song

Macdaddy1622 - Trash as I expected

Always have to show ur body for sales

She sounds the same in everything. I love her personality though

love🙈 - Card in is better than niki

Horrible. Worst song ive ever heard. Some people really hyping up garbage. I rather connect my Bluetooth to a trash can 😂

This song is amazing I love it all you haters are TRASH,To me “Press” means Haters.Haters,Haters,Haters CARDI DONT NEED NO HATERS

She just keeps topping herself hit after hit! This needs to be higher in iTunes! #1 let’s go BARDIGANG

Promotes violence and simply unladylike. Zero stars if I APPLE would let me !

Not Cardi’s best song, but she still slayed, because she is a queen!

Really creepy and dark sound to this one, like a lot of her others. I wish she would make a few more fun songs

She more of an idea behind the song itself... love it ❤️❤️❤️

Invasion of Privacy and Money was AMAZING. BUT this is sad. This is such a bad song.. Can't even stay on beat. It sounds rushed. This is a 2 minute song with generic lyrics and 30 seconds of outro music at the end! I love Cardi B but I hate this one.

Cardi and Offset’s BET performance was 🔥🔥 ! Love the song!

Liathelamp - this is so bad

she should stop making music this is not good

not very creative lyrics, the beat cant even save her this time.

Ineedabetternamee - This woman won a Grammy?

bitchpleaseimbarbiecardi!!00 - Not great at all

What happened to your good music. Spiralling downwards ?. The beat & lyrics are horrible

Not good at all!

It’s scary that some people think this is good

that bitchb - Snippet was misleading

What even is this trash lol

what is she even saying

Not worth the hype

It’s hard listening to Cardi struggle to stay on beat

Walrusssasaaaa - wasn’t worth the hype

The snippet sounded so good but I hear it now, it doesn’t sound as good 🤷🏾‍♀️

stinkgucara - cardi with another banger

im a nicki fan ngl this slaps so hard

like everything she does, this sounds horrible, the lyrics are mediocre and it’s the same stupid flow. this is who y’all stan ?

@pleemirage: @SebGorka @kayleighmcenany An excellent moniker. Meaning no disrespect, she *IS* pretty hot. And yet those in that press ro…

@RealJamesWoods: I witnessed an actual shuttle launch once. It is an experience like no other.

@spinnellii: dares one of the members of press to ask 45 what he thinks about Genovia’s COVID leadership

@BlayneLannan1: Our new Press Secretary is FIRE. She is beating the MSM at their own game and they hate her for it. I love her.

@StateDept: .@SecPompeo on China: If the Chinese Communist Party wants to demonstrate real openness, real transparency, it could easily…

@JudicialWatch: Judicial Watch announced that it received the “electronic communication” (EC) that officially launched the counterintell…

@RealJamesWoods: It’s not completely far-fetched that Democrats are keeping an entire nation locked in to avoid #GropingJoe having to fa…

@ChadMayoh @mjwood00 @DPJHodges Yes, of course. With what's happening its the press that are at fault 🙄

@WayneDupreeShow: She is a one-woman fake news wrecking ball and the press and anti-Trumpers everywhere are losing it 🤣 …

@JohnEdwards33: After seeing Sunday’s catastrophic failure and fall-out from @BorisJohnson’s press conference on Cummings we begin to un…

@darrengrimes_: My God. The established press asking the same tired old question. Is it any wonder the public are switching away from th…

About Press [Cardi B] MP3

You can find here mp3 music file from artist Cardi B, album Press - Single, song Press, released date 31 May 2019. Listening and fast downloading online to Press - Cardi B mp3 preview is free and does not require registration. 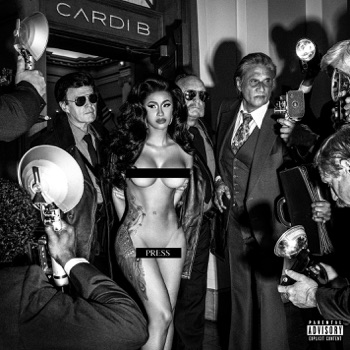