We need miss back bad

I'm not a huge fan of her but this song isn’t bad at all... I like it. To the bad reviews from obvious NON Fans: Yall acting like you were forced to listen to her music or some shit. Weird af. 🤡

LilDinoSteel - Bad !!! I wish I could put no stars

I don’t get what the fuss is about the music is not even catchy. It’s got a weak beat and it’s not enjoyable

I love you Nicki

Folks already know Nicki got them bars that'll bang a bihhh head with!!!! I love you much Nicki 🤘🏿 keep giving me good music

BUT AINT GOT NO MOUTH WHEN MONEY BAG TAWK!?

She’s made better music than this. Not impressed 🤷🏽‍♀️

She went in on this one 🔥

Pretty impressive considering I don’t listen to nicki, she’s stayed relevant for more than a decade and is still making great music, good lyrics and very catchy. Haven’t seen another rap girl do it like nicki, queen of rap, YIKES

If I could give it a half a star I would

QUEEN OF THE WORLD 🤤

lorraine 1919 - Nicki is a flop her career is done

Always raising the bar she will remain queen

I fkn love this!!

i didn’t think nicki would ever make a full solo trap record ! love it !

BubbaCub - Why does she charge for this?

The beats sound like something that someone made messing around with GarageBand or some other free beatmaker off the internet. She sounds like she is chanting some kind of 3rd grade poem. People, PLEASE. Don't validate garbage "music" like this.

I’m not even a Nicki fan, but I’ll take anything over that Cardi B trash. 🤷🏼‍♂️

Ms.Petty did what she had to do btw it’s a promo single

She really can make anything work. I love it!

This Ain't Nothing New 💁🏽‍♀️

This is awful. Can’t believe all the rave reviews. 0 stars

Lindsay Elle - Too much 🔥

🔥 Blasting this all month

Nicki the Barbie , Nicki the ninja , Nicki the QUEEN !!!!!! Never disappoints dammit. Argue with your nurturer.

YIKES, freestyle challenge. Fraudi b ghostwriters could never be so clever with the double, triple entendres, metaphors and word play. BirdieGang let’s face it, you’ll never get a freestyle, all pre-written and rehearsed and still sound like 🗑.

Doodie & The Brofish - Grimy As Ever - The Queen Still Rippin’

Don’t step to Nicki, she still the No. 1 chick in the game. Raw, original, and self made. Ill track.

Brooke BBQ - Cardi come back we need you

BeautifulOsh - The Queen Of Rap

Nicki Minaj hasn’t had a hit since high school

Queen of rap did her thing🔥🔥

Tempest_dy - The Queen Of Rap

Lit AF ‼️‼️ The Queen has another ONE.

She ain’t come to plaYYYY

Nicki is THAT rapper.

first female rapper to have a number one solo song on itunes in both the 2010s & 2020s decade. Call it what it is, legendaric

sis said what she said 👏🏽

Walrusssasaaaa - Not a huge Nicki minaj fan but this is fire 🔥

Queen of rap did it again I think she should put this on her secret surprise album what did I just do? Oh well great song! 🥵

CarrMusic1234 - Return of the Queen

Great record for the Queen to kick off her second decade of domination! She was able to persevere through a tough time in of radio blackballing and hatred from other envious artists. She came out victorious on the other side and we couldn’t possibly expect anything less because her talent is undeniable. A true artist through and through.

Nicki’s sound is so tired. Her bars always sound like she barely finished 3rd grade.

5th thing thing is coming you heaux are NOT readt

Trish🏹 - why she snap

Very fitting name. Because yikes is all I can say about this!

She did it again 🔥

JORDANMINAJ - The queen is back !

This is a good way to start a new era ! YIKES

The queen of rap!

She did what she had to do.

A great look into what her fifth album will be. She always serves bars, metaphors, double/triple entendres and delivery. Everything you could want from a rapper. She makes it look easy. True QUEEN. 👑

This is the song we needed after a long wait! It is fire and does not disappoint.🔥

Nicki definitely gave us a little taste of what’s to come.

The song is excellent and really shows that Nicki's rap skills are unmatched and unrivalled. Congratulations on another hit.

Welcome back my queen. Hope u kill it this time with music video and album. 🔥🔥🔥🔥🔥🔥🔥🔥

This is almost as bad as her brother.

What else do you expect from the queen of rap?! First song I ever paid for! 😁

#yikes you do IT for likes

Every song released my Nicki Minaj is a work of Art and the fact that everytime she comes back her verses hit harder! She really is the Queen of Rap!

Well what did you expect it’s the queen😌

Such a good song full of dope bars. Have to have some IQ to understand

Queen of England Nicki Minaj snapped. The queen rules supreme over the other rap b¡tches

Amazing start to the era. This promo singe is showing us what NM5 will sound like. The beat and flows are amazing. She snapped! The girls just can’t do it like her.

Yikes delivered everything we wanted from Nicki minaj. The flow, beat and bars are too lit!! This deserved lead single - this buzz single is doing what’s its meant to and it’s creating buzz!!!

This goes so HARD! And it’s something light, The queen outdid herself

YES THE QUEEN IS BACK WHATS HAPPENING

Catching s**t - Nicki on her a game as always and just get started. Can’t wait for the album 💥

LilyChaSooRin - The Queen is back on their necks!!

Nicki reveals her promo single ahead of her 5th album. Yikes is a trendy trap beat with her hard hitting lyrics coming at her haters’ throats. Can’t wait for the new album!

Queen with them bars

xavsjeh - SUCH A QUEEN I LOVE HER

Her music is amazing!

I literally cried tears of joy when I first heard this.

Queen of rap saving us all

Nicki has gone back to her raw roots with her new song “yikes” has an addictive beat to it and it overall a very good song deserves everything, good comeback ! Can’t wait to see what she has in store for her new album this year. Keep streaming and buying everyone !

Lyrical genius at it again

The Queen is back and she’s not going anywhere, anytime soon. Bow down

You a CLOWN, you do IT for likesss

@TimOBrien: Yikes! According to reality, your father bankrupted six companies, cost tens of thousands of people their jobs, gutted Atlan…

@DEM0NPUP i am oh yikes

@TimOBrien: Yikes! According to reality, your father bankrupted six companies, cost tens of thousands of people their jobs, gutted Atlan… 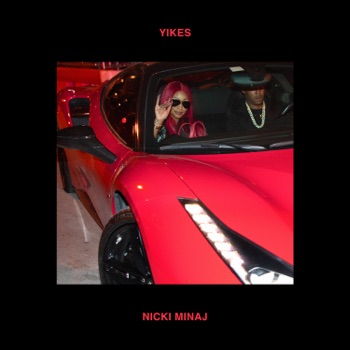