Stuck with U by Ariana Grande & Justin Bieber MP3 Info

Download and Listen Stuck with U by Ariana Grande & Justin Bieber

ariana did charity, that’s the only reason why i’m even giving it a star

Over the top amazing music, lyrics and vocals by Ariana & Justin. Will be one of the top 10 songs of 2020!

slayyy~👌🏽 - can yall stop coming for her?

This comes from a fan of both. I really expected better, this song sounds like it was done in five minutes. I was expecting much more

Such a nice song!

The money isn’t adding up for how this is “for charity” and the collaboration is really forced. They may be friends, but that doesn’t mean they should just throw stuff out there when they’re bored. People are really struggling through this pandemic and they’re cash grabbing. It’s not like they don’t have the money to make the song free. It’s just really disappointing that they’re pretending to make things better for people. The vocals aren’t that bad, I think it’s the fact that it’s clearly more for them than the public is what stinks.

I love what they are doing to raise money!!

5thAve.Allman - Proceeds and profits are AFTER the cost to make the song

For those questioning why only $0.80 of every $1.29 purchase is going to the charity, this is because the cost to make the song still has to be covered. I don’t know if the artists are making any $ off of the song, BUT there is still the cost of the song to be recorded, produced, edited, and distributed. I love the song and I am not a huge fan of Arianna Grande (I’m a strong 90’s grunge supporter so totally different genre). However, I respect both of these artists talents and am extremely impressed by their desire and commitment to raising money for this charity in this crisis.

I’ve never been the biggest fan of Justin but they sound awesome together. And if you want to hate just don’t listen to the song! My god!

I love this song so much! Streaming this also helps charity! 😍

Not really a good song by either. Their “talent” if you want to call it that has been fading for some time and it shows.

GOOBA needs to be number one cuz it’s a meme. Update: They bought extra units (30,000 with 6 credit cards), so they actually cheated him out of it. I don’t really think 69 should ever get a number one song, but this is just cheating! 😡

ShOrt9 - Not a charity song

Make all profits go to charity

scooter is so broke after taylor swift, he forced these two artists to collaborate on a “charity” song to try and make money. in the middle of a global pandemic. RATS.

Magdalene B. - Ripped off other songs

How many times can Justin Bieber write multiple versions of “I’m gonna get to know you better” in songs and still make money from it? Write new lyrics. Also sounds like a rip from Rihanna’s “love on the brain.” Fail.

I fell down a bucket - No

I love this song, it’s a good wedding song. This goes out to all the people giving this song hate for reason. 🤡🤡 Also I’m calling out the person who said Ariana is trying to be like Beyoncé. Bisshhhh shut up and mind your business and get a life. Ok that’s all this is a good song😃❤️.

i mean it’s alright but i don’t really get the hype. ari’s music has become really uninteresting lately, and with justin bieber? nah girl😫

It’s a good song everyone chill the f out

it’s for a good cause and it’s a bop.. the harmonies are so well done

This sing is saying it donates profits. Is that profits after scooter, bieber and ariana get cut their check?! What a transparent money grab. Shameful.

Y’all know what you’re doing. (also Ariana stans the most toxic fans out there which makes sense seeing as they’re a bunch of irrational 13 yr old girls)

So sweet that Justin and Ariana didn’t even have to donate anything but ARE CHOOSING TO DO IT! I honestly think that at least of $.80 cents is so generous considering they didn’t have to do it at all! To the people complaining, please go donate then and do your part! This song is so sweet and such a breath of fresh air during this time.

Give all to charity

This is an awful song

Justin & Ariana’s voices compliment each other so well. This song is so beautiful. I can listen to it all day. And it’s for a great cause. Well done to these 2 amazing artists.

Everyone needs to listen the best song in the world

How can a charity song be that good. They are giving all the money made from it to the first responders foundation. I don’t know a better way to say thank u. It’s really different from all those chart hungry artists out there.

This songs so amazing love both you guys glad you guys did a callab like this and it’s also for a great cause as well best song ever !!!

Via Lynx - One World

Love this song it’s great love there voices together

justin and ari together is just legendary

I can find 20 songs that sound just like this. Do something new or leave the industry tbh

Asshhleyyyy - STREAM THE SONG ITS FOR CHARITY

waited forever for a collab & this is the perfect time to release it. ❤️

I absolutely love Justin & Ariana to bits. This is absolutely incredible.

This song would be better WITHOUT Justin Bieber

This is an awesome collaboration.

What A Amazing Song Thank U Ariana And Justin For This

Kai the wildcard guy - Stuck with u Review

The instrumental is so simple and amazing. And the vocals are amazing on this track.people really need to but this song it’s amazing.

This song is so catchy and both their voices!!!! It’s so good

ARI DID THAT AGAIN. This song is a blessing. -Barbz

reviewer of all skngs - BUY IT! ITS FOR CHARITY!!

they really brought this one home to their quarantine! i love it so much it’s such a chill vibe and it’s such the quarantine mood! definelty worth the money. AND ITS ALL FOR CHARITY

GOOD STREAM IT U BEACH, ON REPEAT !!!

This song is all i needed

Such a beautiful song. The whole world needs to hear this. Great job Ariana and Justin🙌🙌🙌🙌🙌

such an amazing song. been waiting 6 years for a jariana collab when they posted a pic of them in the studio together. their voices sound so good together and i can’t stop listening to it. so proud of justin & ari for making this beautiful song and it being for a great cause 🖤 buy and stream #stuckwithu !

mhunjan143 - So amazing and for such a good cause ❤️

proud of both Justin and Ariana 🥰🤍

You should listen to it, it’s so good that I’ve been bawling my eyes out for the past 30 minutes 🥰🥺🥺🥺

Love it. My two idols partnered up and created something extremely special.

both of their voices together are INCREDIBLE. *chef kisses* and for a good cause? a whole bop

I LOVE THIS SONG.... THIS IS MUSIC YALL

this is exactly what we needed in those hard times

Been waiting for their collab FOR YEARS. So great to hear them harmonize! Such a cute song for a great cause. Stay safe jb and ari 🥰🥰

Oh my Grande this song is amazing. We waited so long for a song with Ariana and Justin and we go it. I cried while listening to this song🖤☁️💍💋

i love this with every bit of my heart.

I LOVE IT SM

ITS AMAZING. WE WAITING SO LONG FOR THJS

A bit unoriginal, and I’m not really a fan of either.

Don’t rly like Justin but I love this song & Ariana

aris vocals are excellent as always, absolutely beautiful. justin adds nothing, if not makes the song worse. his part just isn’t it, i’m sorry y’all. nothing’s special about the song in its entirety,, it’s just a generic pop duet with the exception of aris amazing vocals. if justin was cut, i reckon this song would be so much better.

Such a great song! I love this together they’re great but solo they are not so good... Big Suprise! I am not being sarcastic

Puts many things into perspective

No way to even explain how great this song is. It’s just a vibe💗

I love this song ❤️

Amazing artists can I even say more. It has a love song kinda feel like love on the brain by Rihanna like that kinda sway in the arms of your lover vibe and I’m obsessed

This song is so everything, ari’s high notes were just amazing! I recommend this!!

I love this so much!! By my two favs as well

this was such a good move. they used two of their biggest artist to collab for the right cause. love the way they have devoted to fund all the net proceeds to the relief. Can't ignore the fact how amazingly their voice compliments in this song. Absolute masterpiece. Congratulations on the release and totally recommended.

JUSTIN BIEBER AND ARIANA GRANDE TWO LEGENDS REALLY DID THAT!!!!!!!!! SO BEAUTIFUL

whatta iconic DUO. i love this song and everything about it. thank you for blessing us.

an incredible song that has such a special meaning. please buy to donate !!

really helpful in getting thru quarantine :)

love it with all my existence

bieberlover19 - this so is AMAZING

love this song so much 😍

YES YES YES! I LOVE ARIANA AND JUSTIN, THIS SONG IS AMAZING! ARIS VOICE IN THIS IS BEAUTIFUL 💗💗💗

liazzle - STREAM STUCK WITH U

it’s a bop, deserves #1 everywhere specially cause it’s a charity single for such a beautiful cause, it’s a r&b perfection

The voice is amazing

The voices, the melody, everything is perfect

The way their voices connect and sounds so good!!!

@breathinavenue stuck with u tie dye!!

@shubham_sainee: My name is Shubham Sainee, a teacher, r/o Muzaffarnagar(U.P.) I came to Mumbai for work. During my stay over here, got…

@justinchartdata: .@justinbieber is now the only artist with 3 songs on top 10's best selling songs released this year, with Yummy (#2),…

@DiyaMenon6: Saw u as Zoya in Bepannaah and remain stuck up in my AdiYa world forever..Hoping this Year Universe Conspires and U return…

About Stuck with U [Ariana Grande & Justin Bieber] MP3 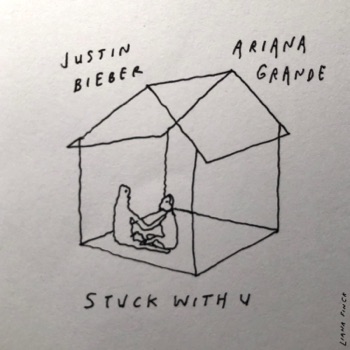 Stuck with U MP3 Credits

Stuck with U Similar MP3