Download and Listen People So Stupid by Tom MacDonald

the voice is great 👍🏼

Keep up the good work!!!

All the 1 star reviews are just triggered people who can’t handle another person's opinion, which proves his point perfectly. But this song is amazing!

Liberals are fascists, they are the Enemy of Humanity. They believe in private ownership, total government control and regulations. Fascism will come in America under the guise of Liberalism. Reagan 1975 Democrats are the Enemy of Democracy

PeaceOnMidgard - I laugh at this

So much truth🤘 yes these issues are more nuanced but doesn’t mean we can’t have fun. Love his music! Share the love

... FIRE!! And I see you jealous racists hating on the white boy, I see you demons. To you haters, tell everyone how many chart topping number one hits you have? Crickets...

Finally a rapper and artist that actually speaks the truth. Great to see someone not falling for what all the other artist stupidly do just to get famous. THANK YOU for not being weak and breaking down like the others have.

Proud of this guy!

Ehshrrvh - The 1 star reviews is who the song is about

How did Tom just fall off the charts completely?? He says what everyone’s feeling... You mad? Good! Put him back in the charts.

Tom is very creative. More of a poet/writer/common sense activist. I love him!!!

TheIrritatingTruth - I just found this dude

But I’m BUYING EVERYTHING Keep it fresh boss!

This is a perfect example of America rn.

The best besting the rest resting them all in place Tom McDonald bringing the end of days.

tarabeshai - Title says it all!

Keep up the great work Tom! Love your message!

Not a rap fan, but this is definitely a heavy hitter and glad someone has the courage to say what most in public eye are scared to!

People who gave this one star are stupid.

A fan long before iTunes picked it up. Tom is the man.

People are stupid, but Tom thinks for himself. We should too!

JediBettyWhite - This song is amazing

This song shows the truth about what is happening in today’s society. And makes you question some stances that you hold.

Couldn’t of been a better song to come out

This song was named after the people 5*ing this trash

Tom is the best out there right now. He raps, spit facts, no one like him!

Runforestrun3352 - Nothing to do with politics he bashes everyone

Saw a review by a liberal bashing conservatives literally nothing to do with either side he’s saying the world today is stupid stop trying to throw politics into it and and either enjoy it or don’t and be quiet.

Why is this song way below the #1 spot now the star ratings seem to be correct at almost 5 stars compaired to the Ratings of Cardi B WAP that is at 3-4 star rating I'm accusing you Apple of fixing your music Charts.

Best song out there.. People get so offended by the truth.

This dude is the epitome of a joke

He’s speaks the truth in all of he’s song’s amazing glad somebody else feels the same way about stuff!

That Retarded Friend - The truth hurts...

...and iTunes is full of them.

For one his song is about people being stupid and dumb but his title is so grammatically incorrect! He’s trash and so is this song, this is what’s wrong with the world today all these dumb conservatives!

He speaks truth. They’re so stupid

Not only love what you’re saying but it’s just good music and the video is Awesome!

Ayyeeee This song is SOOOOOOOOOOOOOOOO needed right now. We need more people telling the truth and doing it like this. Insanely catchy and relevant! Tom has my support and my $$$ for telling it like it is and for doing it with swagggg.

H8RiD - Perfect for the current time we live in

Song is so true. Like most of Tom McDonald’s music.

Tom your going to the top your the best of the 2020 eras so proud of your team and your work. Continues doing a great job and do your job and do more hits.

Voice of a generation

gbrigs - Song is so true

Keep up your good content man love it. Finally someone who will speak up

It’s kind of whiny... not a good vibe

Loves the song can’t wait to get my albums!

Authentic & original lyrics shining a spot light on the truth🔥 God is going to take you and your loved ones places, Continue to stay humble & true; enjoy this journey. Great job man!

the nuckname is taken - Garbage

if your looking for a song that spits facts from start to finish, this is the song you want in your life. incredible song. Tom you need to do more songs like this.

Dubs is my jam - HOG

More people need to hear his music, pay attention instead of just bobbing your head to a beat.

D..bag - Looks like we've got all the trump supporters on here

This guy speaks truth, anyone who rated one star is a ❄️

Sounds like Eminem 20 year ago. Heard knock off Eminems over and over 🤦🏻‍♂️ make it stop

love this guy! why he speaks the truth ...

This guy has been rapping the truth in every single one of his songs, this guy needs to be heard worldwide 👍🏻👌

Only recently found this guy, his songs resonate with a lot of people! Love the honesty!

Geordie37 - Straight to the point

About time someone spoke the truth-love this guy!!

slothyst - Everyone open your ears

Never heard so much truth in one song! This needs to go world wide

Spooks bristol - The first I tune song ever purchased 🙌🏻💯❤️

The best realist thing I have heard since Eminem

Says what everybody is thinking great track

I love this song straight to point no holding back

Such a real n true song, if you’re offended get over it

Best and realest rapper out there in the world today! He is real, authentic, one of a kind! Totally independent and wasn’t his own way!! He deserves to be number 1 on the charts! HOG fam for life! ❤️

For the dumb generation

Crash Matilda - I am scared

Seeing this so high on the charts is legitimately scary. Based on the preview alone, his points about abortion and transgender issues are baffling, and show no sympathy to people who get spat on simply for being who they are. Media like this stokes the politics of division even further, in the guise of presenting the majority as the victim somehow. I am also a white male, but claiming that "gays" are getting more attention when trans people are offing themselves everyday is the most childish thing I've ever heard. As for the music, I don't think there are any actual rhymes in his raps, and the entire beat is just one chord repeated over and over. Just an empty vessel for more "owning the liberals" rhetoric. What is the point. 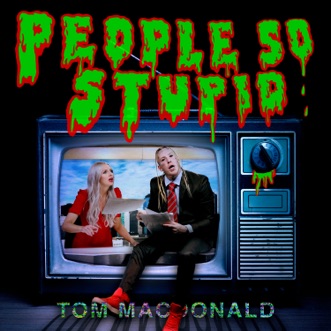