"Piano Man" was Billy Joel's first major hit and is considered Joel's signature song. The verses of the song are sung from the point of view of a bar piano player who focuses mainly on everyone else at the bar: John the bartender, the waitress, and bar regulars like Paul and Davy. Most of these characters have unfulfilled dreams, and the pianist's job, it seems, is to help them "forget about life for a while". The chorus, in bar-room sing-along style, comes from the bar patrons themselves, who plead, "Sing us a song. / You're the piano man. / Sing us a song, tonight. / Well, we're all in the mood for a melody, / and you've got us feeling alright." "Piano Man" has been released as a single and on several albums. "Piano Man" is a fictionalized retelling of real people Joel met during his days as a piano-lounge singer in Los Angeles, after the failure of his first album, Cold Spring Harbor. Joel's own personal feelings about this failure are expressed in the failed dreams of the characters in his song. At the time, Joel was trying to get out of a bad deal with the record company Family Productions, so, according to Joel, he was "hiding out" at the bar, performing under the name Bill Martin while Columbia Records tried to get him out of the deal. It was first released as the second track on Joel's Piano Man album and was later released on several greatest hits collections, including The Essential Billy Joel. When originally issued as a single, the song was deemed too long by record executives (5 minutes and 38 seconds), so two verses were cut in half and spliced together for the release as a 45. Later, Billy Joel's song "The Entertainer" mentions this event by commenting, "It was a beautiful song, but it ran too long. If you're gonna have a hit, you gotta make it fit. So they cut it down to 3:05." Joel admitted on Inside the Actors Studio that each of the characters in the song is based on a real person, either a friend of his or another stranger at the bar. It is in the key of C Major and has a fast 3/4 time signature. It begins with a jazzy piano line moving into its famous piano/harmonica intro. The verses and subsequently the chorus feature a walking bassline in C ending with a D - G turnaround. The song follows the form: Intro, verse, verse (sung an octave higher), prechorus, chorus, instrumental fill. Instrumentally, Joel's 1973 version features piano, harmonica, bass, accordion, mandolin, drums and vocals. The song has been one of Joel's greatest hits. It peaked at #25 on the Billboard Hot 100. Today it remains popular, and ranks as Joel's #1 song on the iTunes Music Store as of July 2009[update]. The song is so well-known that during Joel's concerts, he usually lets the audience sing the chorus. During the first Face to Face tour featuring Elton John and Joel, ads promoted the event as "Rocket Man meets Piano Man". "Piano Man" was ranked #421 in the 2004 List of Rolling Stone's 500 Greatest Songs of All Time. * "Weird Al" Yankovic created a parody of this song called "Ode To A Super-Hero", which can be found on his 2003 album Poodle Hat, about the first movie in the recent set of Spider-Man films * On an episode of The Amanda Show, Amanda Bynes and Drake Bell sang a parody of the song in a restaurant * On an episode of Robot Chicken, Billy Joel, voiced by Zac Efron is shown at a bar murdering the Davy mentioned in the song declaring that Davy is "one with the Joel". At the end of the episode, Joel performs a parody of "Piano Man" with altered lyrics, pulling out a gun at the patrons, and insulting Pete, who kills Joel and receives the news that the novel he was attempting to publish has been published, and that his wife has died from crotch-rot. Pete declares "Poetic justice!" ending the skit * Hamish & Andy also created a parody using part of the song, calling it the "Sex Excuses Song" * Flight of the Conchords song "Bret's Day" is based on "Piano Man" * On an episode of "Glee," Neil Patrick Harris and Matthew Morrison sing along to this song in a bar as it's played on the jukebox. Download Billy Joel - Piano Man MP3 song file at 320kbps audio quality. Piano Man MP3 file uploaded on November 9th, 1973.

Jaybizzy135 - Beat value and all the favorites

Comparatively it's a better price and includes a wider array of songs than most compilations. Very happy.

THIS ALBUM IS WAY, WAY, OVER PRICED!!!

Always wanted a billy Joel album and am not disappointed.excellent melodies,piano playing and lyrics. I’m a classical music lover and this musician and his music is classical.

This album has everything anyone could ever need. It is so relatable at so many points and has a perfect combination of major and minor songs to bring you down then cheer you up.

annajive - This has all of my life

This album is great...it has my entire childhood included on one album! Great songs by a great artist that "take me back" in the sweetest of ways. Mr Joel, I am so in love with you.

@kurbykurbykurby This is a song that I'm currently learning how to play on the Piano. Here's the original version…

@dog_feelings: i did not get much sleep last night. because of your sky booms. to make up for this. i will be extending all snoozles. by…

@mikegarson: David had such graciousness. Most singers like to be supported with a band of background pieces. He was very inclusive. I n… 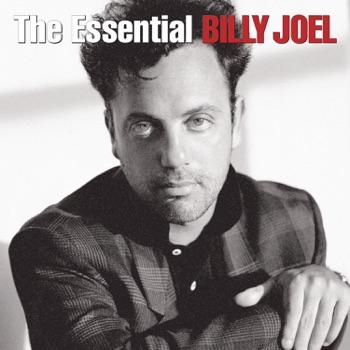