Oof you broke it - #BLM Playbook right here my peeps

It’s July 4th 2020 and this album is more relevant than ever. No justice No Peace.

Simply put one of the best. Cope this album. I guarantee you will not be disappointed. Only wish they threw on the original version of pistol as well root of all evil and food clothing and shelter. But regardless this is still a classic. Peace of mind...

basieswings - One of my favorite albums

I am 34 and have been listening to dead prez for about 20 years. I wish hip hop could be what it used to be.

I heard this album back in 2000 and couldn't find it since until I watched the Chappell show. Thank you Dave!

be still know God - Dead Prez PLEASE GIVE US MORE!!!

IT'S CRAZY THAT YOU ARE NOT TRENDING AND EVERYBODY IS TALKING ABOUT YOU!!!! LET'S GO! STAY STRONG! MAKE IT HAPPEN!!

Salute these brothers had vision and a voice.....was exaactly what I was looking for

A dime a dozen, nothing worth buying.

Why do you get to say cracker in your songs ? grow up ...

This album is nearly 15 years old and has yet to age a day. The first half is dedicated to documenting the demoralizing nature of the struggle, the second half is the uplifting coping instructional, and the whole thing is exceptional. One of the 5 best hip-hop albums of all time (in my opinion) and will stay relevant so long as cultural and racial inequality continue to stagnate our collective advancement as a nation.

Geekegurl - By far the most revolutionary albums of my life

I was in college when this album dropped and it still has had a significant impact on my life. It taught me to think and to listen to the lyrics that entertainers perform, and to ask the questions do they really believe in these lyrics and live them out songs like "be healthy" and "discipline."it touched on so many aspects of the black race from education to nutrition to mental health to sexual relationships that it's all encompassing and holistic. Not many artists can be this raw and truthful about their views of society and politics without stepping on toes today. I wish Dead Prez could so another like this. I wasn't impressed with the second album but this one will always be 1 for me

TriChiTown - An Incredible Album, ahead of it’s time!!!!

The 2014 The Revolution has been televised! Please Come back DeadPrez and teach the People!

GreyTiger - One of the most poignant HipHop songs ever made

Slept on , School is in session with beats ... Gotta love it!

This is a classic album with a great message on every track. Dead prez got a classic with this one

C Tills from D-Town - This album is sick!

I had this album when it first came out and listened to it non-stop. It's still just as sick today as it was back then. To "Get To The Choppa", even if they are racist these guys are amazing artists. I'm white and it doesn't bother me, didn't bother me then and it doesn't bother me now. If you don't like it you don't have to listen to it. And it's pretty funny that you are talking about education and your post is full of basic grammatical errors.

"Holder of The Light" - Power!

IM NOT SURE ABOUT REAL IT HAS SOME TRUTH BUT MOST OF IT ROOTED FROM RACISIAM NOW..IMMORTAL TECHNIQUE IS REAL 100% ITS NOT ABOUT BLACK AND WHITE NO MORE ITS ABOUT POOR AND RICH AND THE NEW WORLD ORDER!!!

Cocoa Smooth - The Ultimate Revolutionary's Guide in one Album.

This album is basically a manual to prepare you for when the revolution comes. Eat right, live right, and be right. Awesome production and awesome lyrics. I can find no inconsistencies about the content and message. Its as they said themselves they are what happens when you put NWA and PE together.

These songs are a gift to the planet, as far as I am concerned. Poets and truth-tellers and cutting edge sounds. Thanks DP for all of this.

I love this album! DPZ RBG! LET'S GET FREE!!

R B G. Revolutionary But Gangstar

Dead Prez, is there anything left to say?

Where is the hidden tracks?

This is the best album I have heard in the last entire decade!!!!!!hip hop lives

Happyhubert - Wow. This is an intelligent rap album

They aren't making fantasies about how many girls they can get, they're addressing problems they see in society, and they're not exaggerating, which is nice. This album is a good mirror for the USA to look in every once in a while. BUY THIS ALBUM IF YOU WANT TO HEAR GOOD RAP. This is my favorite album of theirs.

herfav - It's Bigger Than Hip-Hop

Best track Kanye West has ever made. All you mainstream haters need to rethink your argument. Hip Hop needs to unite.

The song, 'Mind Sex',is EXCELLENT for adults who recognize that sex is more than physical. Every song on the album, 'Let's Get Free', actually serves as a STIMULANT of some sort or another.

Especially Its Bigger Than Hip-Hop !!!

Matt4492 - One of the greatest albums

this is an amazing hip hop album. dead prez is great and its a shame that they dont get radio play, but also great because it keeps them raw and makes them produce fantastic music. this music isn't generic mainstream rap its a must buy for any true hip hop fan

why do i want to end you - universal

this record is not just for the black and brown but for all americans. dead prez opens an eye into what is really up with the USSA.

This album is racist

Dead Prez is the epidomy of keeping it real, Love their Music. If you like real music you will like this album.

b niz - be healthy

only chronic no cigarettes mofo

It's a shame that not too many people know about Dead Prez, I was suprised when i saw that itunes had it, one of the best albums bar none

I don’t even like rap, and this is a fantastic album. The lyrics are honest and profound. We need more music like this…

All day every day. People Army for life!

In general I hate rap, but this is: insightfull, informed, thought provoking and of a sociological and philisophical magnatude unlike any album... ...ever. In the same camp as George Orwell, Thoreau, Malcom X, Emma Goldman and many other Great Minds. Here is an extra "STAR" since they didn't supply enough.

THIS ALBUM HAS GOT TO BE ONE OF THE BEST HIPHOP ABLUMS EVER MADE !! BEATS, RHYMES AND TRUE LIFE EVENTS REALLY MAKE YOU FEEL LIKE YOUR LIVING THERE LIFE..ALL MY YOUNG BLACK AND BROWN BROTHERS OUT THERE, GET THIS ABLUM CAUSE IT MIGHT CHANGE YOUR LIFE !!! REAL TALK !! STAND OUT TRACKS 1. PROPAGANDA 2. PSYCOLOGY 3. BEHIND ENEMY LINES AND HAPPINESS

chillinn - "The Poet"' has got it said

It's Dead Prez, Thats Too Much Said.

This whole albulm is raw, truthful, and REAL! If you hate 'mainstream' get this albulm and expirence true rap with meaning and voice!

This record is arguably one of the greatest political/socially conscious hip-hop albums of all time.

This album is one of the top 10 hip hop albums of all time. Lyrically, production wise, not to mention the message in the music. Put this alongside, illmatic, the infamous, the chronic, only built 4 Cuban LINX, and any other classics. If you don't love this record, you don't get it, buy a Soundgarden record and give up on hip hop. DP FOREVER.

silkyboots - One of the realest albums ever 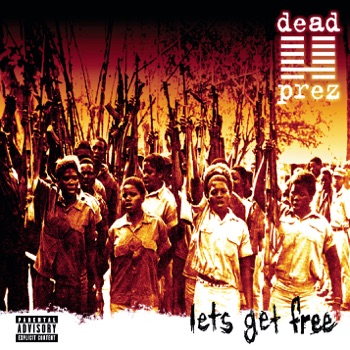