You sound like a girl REALLY not Joking even my friend polly says that!!!(are you a boy or girl)!!!!...

RoRob8 - Hi here is something tothink about!

I found this song goood for a while the it just was like any other song. Plain and dull except for the change of tone and the excellent wording which really cought my attention. I particuairly want to say a huge well done to Sean for his exceptional work helped of course by the one and only Justin Beiber. I hope that they both do very well in the future and produce some more smash hit for us soon!!! Miranda Derwent black-water

Justin cannot dace. He is crappy. Sean Kingston is singing words that mean nothing. 'Please don't waste my time' is a phrase in the song.More like they're wasting OUR time! And it's in the top ten! The tune is OK, but, i wouldn't listen to it just 4 that! I'm 12, and a girl,but i don't think he's that hot. Lots of my friends do, but if justin didn't look so hot, no one would look at him. How do we even know that is JB? How do we know the person's name really is Justin Beiber? Sean Kingston is ok, but with JB, he drops a looooong way down. OK, so what im getting at is that his songs r utterly rubblish, and he sings total nonsense.

Xfactorextermination is seriously sad!!! Beautiful girls was so c**p that it became anthem if 2007??? I don't think so!! If you think it's so rubbish than you didn't buy it so why the hell are you reviewing it!!! Sean Kingston has MAJOR talent and although he's young Justin bieber is already a MASSIVE star!!! So stop hating on both of them!!!

The worst song I have ever heard JB is rubbish. I could sing better than him. I thought my ears were bleeding when I heard it. He's nowhere near as good as Bruno mars,Michael Jackson,Conor Maynard or PSY. I never want to hear it again this song is like💩💩💩💩💩💩. The day I heard that song was the worst day of my whole little life. I'm going to be scarred forever. JB's hair is really bad it makes him look ugly he might aswel put mud on his head.

some people hate him some love him. actualy this is amazing (for anythinh 2 to with jusin beiber)

Shawn and Justin best song I watch it everyday

Remember Sean Kingston's rubbish debut song Beautiful Girls? This childish counting rhyme duet with gender-confused dwarf Justin Bieber has become an early contender for worst song of 2010, just listen to the lyrics, Bieber's squeaky voice and Kingston's annoying rapping. It's the musical equivalent of a hemorrhoid, which must be bad, even by today's standards.

afrodude68 - Would be fine without Bieber

Haha, love this but Bieber spoils it.. The little girl :/

Badcompany202 - I thought it was a girl singing.

Oh no it's bieber and he is gay lol

Jb is a legend - OMG

This song is the best xx

Why the heck did sean kingston chose to do this with Justin Bieber he sing like a 8 year old girl! Could have been a great song without Bieber!

I mean it's a catchy song I'll give it that but JB sounds like a girl. Sean Kingston would be as well doing a duet with a girl! No wonder Selena broke up with JB! He's such a bad singer! I mean he's not the worst but face it..he'll never be as good as Jason derulo or Ed sheeran or Bruno mars! Good song if u like JB and Sean Kingston, bad song if u hate both and ok song if u like only one of them! Nuff said!

I actually really love this song, and kinda like Bieber in it too. Notice how all JB songs are 1 star comments but on this there's lots of 5 stars? Yeah that's because this isn't his usual music and I wouldn't like it anywhere near as much if it wasn't for Sean Kingston. (btw I'm a 12 year old girl and I don't like Justin Bieber).

Mrozozoz - I think people should respect him

That's all u have to say!

I'm not really a bieber fan, but this song is not really that bad... Makes me sing along to it :)

I'm not a fan of Justin or Sean but this is a very catchy song. It's by no means amazing or the best song by either of them but it's a pleasant surprise.

I love this song so much I am surprised it ain't gone #1 Manchester lives you justin bieber :-). <3

Jackdellis - Justin Bieber are you even a boy

I'm not quite sure on this one, this song is good apart from when Justin bieber opens his mouth, Sean Kingston is amazing though ;)

this song always makes me smile :)

My sister plays this non-stop in the car. I now have an urge to find Justin Beiber and see if I can punch him male.

This song is really good even though I'm not a beiber fan!!!

It's that awful!!!! What were they thinking?? TERRIBLE!!

Song me + friends sung in school talent show. We won. This song is my inspiration.

Justin Beiber is serously cute but he sings like a girl! He actually dus reely well in this song and so dus Kingston. Luv this song!!!

I'm not a big fan of this, but people, Sean Kingston is a good singer, he was just not up to standards when making this. And Justin Bieber's part in the preview is actually okay. And, yes, we know Sean Kingston isn't exactly slim, but it's still mean and even rude to point out his weight. Sean Kingston can sing better than his haters, anyways.

Not a usual fan of either of these artists, but together they are perfect; one of those songs you can't stop listening to and the lyrics are epic. I'm a 13 year old girl, but no, I'm not in love with Justin but he is cute :) x

Justin doing a duet with sean kingston!!! It is a epic song! They should do a duet more often! X

Happymichael - I love the song!

To be honest guys, the song is very good musically - It's just so catchy! Don't think we should get personal with the singers.

at least biebers paying attention in class what's next humpty dumpty, pat-a-cake, there's talk of him going into acting at the end of the year, he's doing the nativity playing the inn keeper

eenie meenie minee piss which of my ocs is this

Hey 'eenie meenie' by justin bieber and sean kingston is my favourite song! Turn it up! 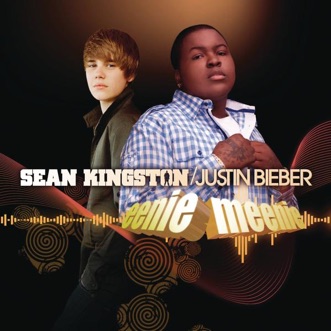