Great music, but the song "Better in Boots" sounds like it uses a melody from "Colder Weather" by Zac Brown Band.

walkeryong064 - The best country artist ever

I love Tyler's music!!! I went to his concert he was AMAZING!!!!!!!! All the people that say he's bad and have never heard him give him a chance he's really good, and for all the people who don't like him and have heard him you guys have no taste in music whatsoever

If you're really country then you'll enjoy this Album from start to finish.

This is why I love Tyler Farr! His music is COUNTRY! Awesome album awesome artist.

I bought one song, then a week later, another, then a third ... (guy walks into a bar, withdrawals, I don't even want this beer) and I just bought the whole album. LOVE TYLER FARR!! His voice is so unique and the lyrics are real and raw and relatable.

I cannot stand this "music" its horrible. I love country and this isnt it. This is so bad it makes my ears bleed. He is such a poser. Hes standing on a 4 wheeler trying to look country. His country "accent" in his songs is so fake. If you hear him talk you can tell its fake. If there were stars lower than 1 I'd give him that. Tyler, jump off a bridge your music is terrible.

Everytime I hear him, I just think he's trying to be someone else. This album is ok, nothing special

This album is the definition of terrible.I already hate the entire genre,but I hate this singer the most.The songs are catchy,but its not a good thing.I barely even notice the verses,all u really hear is the chorus.If u want to hear something good,do any other genre.Don't waste ur money on this trash.

These songs are great!!

First of all, those of you saying Tyler is bro-country only want to speak derogatory against someone who is a rising star! However, even if Ty were "bro country", the bro-country singers seem to be doing well for themselves. That is the dumbest name/classification I have ever heard! Now, Tyler has put out another hit album. There is not one track that I don't love. Ty is true country, and learned from the Ol' Possum himself. If you dont like Tyler, you need to reconsider your taste in music!

Taylor102693 - His voice. Most annoying thing ever

His voice is so annoying. Got a frog in your throat? A guy walks into a bar is a disgrace to not only country music, but every genre.

Jman5usa - Best country album in a while

The best country album I've heard in a long time. Suffer in peace is a great song! His voice sounds amazing!

A Great Album with a good mix of old and new! Love his sound and lyrics!

Tylerrrrrr2121 - Album of the year

Definitely wasn't expecting this. It's killer. Awesome album with a lot of good songs, not just one or two. Except the opening song.... Lol guess that's a guy thing. Overall great mix of fun songs and lyrics that make you stop and think. Pleasantly surprised by Tyler Farr! He knocked it out of the park with this one.

Cause the title of the song is "A Guy Walks Into A Bar" , which is supposed to be a punchline , yet the song itself is "depressing". SMH , country singers will never learn.

This is the best album next to Jason Aldean.. He started Tyler out but still they are both wonderful 💞

I bought this album last night and cannot stop listening to it!!! Probably the best country album this year so far!

Casey Bryne - Such a fabulous country singer! This is what it's about!!!!

Great songs, great voice and great lyrics! You did it again Tyler!!! I'm loving you and your music!!!

MattzPug - Tyler Farr does not disappoint

From what I have heard, which is about 6 songs in, I felt compelled to write a short review. His voice is something that isn’t out there. Definitely an original. Ive seen him about 4 times in concert. He is poised to headline. Great album! Highly recommend.

Good job. Good old country music is what this is mixed with pop, hip hop and soul

Been waiting for a while for an awesome album through and through. Good mix of paces, and beautifully written and sung.

Tyler Farr is an amazing artist. He is easily one of the best up and coming country artists. I saw him last year at stagecoach and he was great. I'm looking forward to seeing more of him!!

I haven't bought a full album in years. This is some good country music.

Great album!! I like the song with Jason Aldean and "suffer in peace" the best but the others are good too!! Nice album Tyler Farr :D

I was never a big fan of Tyler Farr. Even went as far as to skip his set multiple times last year at concerts. This album is a game changer, though! There's not one "skip over" song on this album. His voice sounds great. Just a great album all together! Now, I can't wait to see his set this summer!

Tyler is by far the best new star and his voice is so country making all of his music awesome!!!

Hey man pretty dang good. It's not that pop I'd thought it would be. Great job!!!

I'm actually pleasantly surprised by this album. Not too shabby Mr. Farr, not too shabby.

One of the best new country albums by Farr!! I'm in love with so many songs. This will be very successful-no doubt!

The sound is so honest! It's old country with just a hint of new country. Great songs, great meaning! I'm obsessed with c.o.u.n.t.r.y!! Keep it up Tyler Farr

I'll be honest, this is not what I was expecting from him. Figured I'd check it out just to see what it's like, and I was actually blown away. Great songs, with meaning, and it's not white boy rap. Way to stay true to Country. Props to you Tyler Farr!

PownalGirl88 - The wait is finally over!!!

I've been waiting for what seemed an eternity for the rest over the album to come out and it's finally over!!! I've had this album on repeat all day!!! Can't wait to go riding this afternoon and jam out to Tyler's new album!!!

The first time I heard Tyler he was opening for Rodney Adkins and I knew at that point he was going places. I went out and grabbed his promo CD and met him and told him I can't wait for more music. He did not disappoint. Thanks for making great country music all over again! Keep it up.

Tyler Farr has made a great country album. It has grit and feeling along with some fun upbeat music. The title track is amazing and Why We Live Here is crazy good. Awesome Job! Love hearing this guy on the radio.

I've owned this album since it came out. This is my main 'go-to' album, I love every single song. No matter the situation. Love, fun, or heartache Tyler Farr's music hits every spot just right!! It can bring me back to small town life with 'raised to Pray' or lend some sympathy when no one understands in 'Withdrawal'. The best part about his music, is that songs will pop up exactly when you need to hear them, like he's reading my mind! I can't wait till Tyler Farr's next album!!!

Fookinator - More than a listen

I picked this up on a whim and glad I did. It's much better than I expected

ggbolger - Great Album! Every track could be a single!

I actually bought this album 3 times! Once for myself and I gifted it twice to my "Damn good Friends"! Well done Tyler!

Addict to iPhone!!!! - Suffer in peace

Tyler Farr knows good music, he has a song for ever emotion.

If you thought Redneck Crazy was good, wait till you hear this. Modern country at it finest. Caught him live in Dallas this year and he doesn't disappoint. Buy this album & tell everyone else to. Be nice to see him here in the UK

Amazing! Only just discovered this guy and he is already become a firm favourite. Can't believe the calibre of songs on this Album, it is as if it's a Greatest Hits album of a career spanning 20 years. 5 Stars.

This is country music at its finest - massive fan of Tyler Farr and this fantastic new album!

Was looking for something new and Tyler came up, so glad I downloaded Great voice and songs on the album, listen again and again 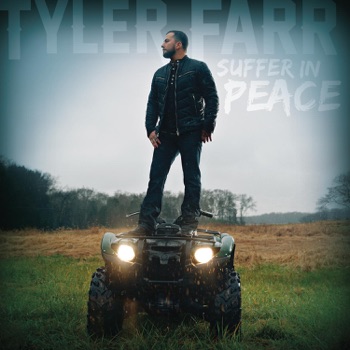