Shatter Me is the second studio album by violinist and solo artist Lindsey Stirling. It is Stirling's first album to include collaborations with other vocalists, featuring Lzzy Hale and Dia Frampton, and Stirling has said its musical style is more progressive than her first album. The album was released on 29 April in the US while in Germany was released 2 May. The first single, "Beyond the Veil" was released on 24 March and has so far peaked at number 22 on Billboard Dance and Electronic Digital Songs. The video was posted the following day. The second single, "Shatter Me", was released on 23 April, and after its first day on YouTube it accumulated 1.3 million views. During its pre-sale, the album peaked at number one on the US iTunes electronic charts. On its released in USA the album reached the second position on Billboard 200, making Stirling's biggest sales week of her career. The album peaked on four different Billboard music charts. On 29 September 2013, Stirling posted on her official website that after her 2012–2013 worldwide tour she had returned to the United States to make her new studio album and in December Stirling announced the upcoming 2014 tour where she "would play some new songs and will have a brand new show to share". Although the second studio album was announced in late 2013, it wasn't until 12 March 2014 that Stirling started posting information on her new material. On 12 March, Stirling added a video to her official YouTube account. The video was called "Album Shower", where Lindsey appeared with some very close friends of her and some well-known YouTube stars such as Tyler Ward, Steve Kardynal and others. On the video Lindsey announced the title of the album and that it would be released around May. On the same day Stirling started her account on PledgeMusic, an online Direct-to-Fan music platform, where everyone could pre-order her new album and other exclusive stuff. Pledgers would receive behind-the-scenes videos, photos and pictures. On 23 March, Stirling announced that the album would be released on 29 April. On the following day the album pre-sale started on iTunes Store and the first single of the album, "Beyond the Veil", was released. The official video for the single was released a day later where it accumulated half a million views on YouTube on its first day. Stirling appeared on 26 March at the Berlin Apple Store for a 30-minute interview and later on performed "Crystallize" live. A day later, the pre-order of the album started on the German Amazon and iTunes. In April, iTunes released two free podcasts called Lindsey Stirling: Meet the Musician where Stirling talked about the creation of her newest album. On 7 April, Stirling's first single video appeared on mtvU votation to see, along with four other YouTube videos, which one would be aired. Stirling finished winning the votation. Three days later Stirling added an event on 29 April to perform and sign Shatter Me CDs at Barnes & Noble, Los Angeles. In April, Stirling was interviewed by Rock Era Magazine in order to promote her new album. On 16 April Stirling posted the behind-the-scenes video for her second single, "Shatter Me". Almost a week later, on April 22, Lindsey performed her single "Beyond the Veil" live at the Universal Studios Hollywood. The second single, "Shatter Me", was released on iTunes on 21 April and two days later the official music video was released on YouTube, featuring the singer Lzzy Hale. On its first day on YouTube the video gained 1.3 million views. On April, Lindsey had an interview with Accesshollywood where she talked about fashion, her new album and fame. On the 23rd of this same month, Lindsey organized an album release party for her fans. 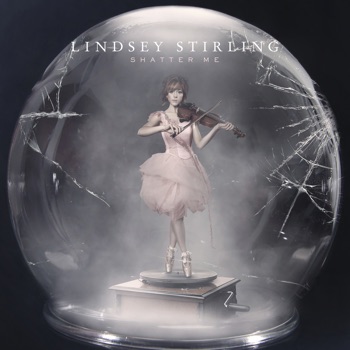